Vice President for Diversity, Equity and Inclusion and Director of the Coretta Scott King Center

Mila Cooper has worked on college campuses for the past 25 years, most recently as Director of Community Outreach & Service-Learning at Baldwin Wallace University. As an adjunct faculty member in the Department of Religion at BW, she taught The African American Religious Experience and has also taught Urban Community Engagement and the First-Year Experience course. She has extensive experience in Multicultural Affairs & Diversity Education at several institutions including Kenyon College, Xavier University and Penn State University in Erie, Pa. At Kenyon, she served as the Assistant Dean of Students, directed multicultural affairs and the Snowden Multicultural Center. Mila earned the Bachelor of Science degree in Communication Studies and the Master of Arts degree in Higher Education Administration from Indiana University of Pennsylvania (IUP), a graduate certificate in Non-Profit Management and Leadership from the Cleveland State University Levin College of Urban Affairs and the Master of Divinity degree from Payne Theological Seminary. Born and raised in Malaysia, Susanne Hashim built and oversaw three comprehensive development programs at Pacific Northwest College of Art, Planned Parenthood Columbia Willamette, and Pitzer College. She has designed and managed campaigns, secured large grants and gifts from individuals, foundations, corporations and government, worked closely with a variety of constituents, and hired managed and mentored staff. She holds a bachelor’s in environmental studies from Pitzer College and a master’s in cultural anthropology from the University of New Mexico. She is a member of the Council for Advancement and Support of Education and the Association of Fundraising Professionals. Gariot Pierre Louima is a writer and educator with experience in recruitment, enrollment management, fundraising, and marketing communications. He served in multiple capacities at Goddard College, most recently as the dean of enrollment and external affairs. Previous to that experience he was the chief communications officer and founding coordinator of the Writing Institute at Antioch College, an editorial director at Miami Dade College, and an editor and publicist at Nova Southeastern University. Gariot taught writing at Antioch College, Broward College, and Florida Career College. His short stories have been published in the journals The Caribbean Writer, carte blanche, Tupelo Quarterly, Crossing Borders, and Obsidian: Literature in the African Diaspora, and in the anthology So Spoke the Earth. His critical essay, "Finding Identity in the Space between Haiti and the U.S.," appeared in Representations of Internarrative Identity (Palgrave MacMillan, 2015). He began his career as a journalist and reported for The Palm Beach Post, Los Angeles Times, Miami Herald, and (New Orleans) Times Picayune. Manley is a native of Baltimore, Maryland. He received a bachelor's in East Asian history and education from Towson University. He earned a master’s in Asian studies, and doctorate in education from the Claremont Graduate University. He has a long history of board and volunteer service to organizations such as the Association of Independent Colleges of Art and Design (AICAD), Ford Family Foundation Visual Arts Initiative, National Endowment of the Arts Education Leadership Initiative, and the Oregon Alliance of Independent Colleges and Universities. Manley has nearly four decades of experience in higher education, including 12 years as president of Pacific Northwest College of Art in Portland and 22 years at the Claremont Colleges -- primarily at Pitzer College -- where he held a variety of administrative posts and served as a member of the faculty. Visit the President's Office website for more. 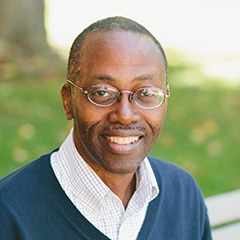 Vice President of Academic Affairs and Associate Professor of History

Kevin McGruder’s interest in community formation led to a career in community development, and now as an academic, to research interests that include African American institutions, urban history, and gay and lesbian history. He has a B.A. in Economics from Harvard University and an M.B.A. in Real Estate Finance from Columbia University. Before pursuing doctoral studies at City University of New York, McGruder worked for many years in the field of nonprofit community development. Positions included Program Director at Local Initiatives Support Corporation, Director of Real Estate Development with the Abyssinian Development Corporation, and Executive Director of Gay Men of African Descent (in New York City).

McGruder’s interest in Harlem’s history led to two entrepreneurial ventures. From 1990 to 1991 he was owner/manager of Home to Harlem gift shop, and from 2000 to 2008 he was co-owner of Harlemade Style Shop, a store providing Harlem-themed tee shirts, books and other items celebrating Harlem.

During the 2011-2012 academic year McGruder was a Scholar in Residence at the Schomburg Center for Research in Black Culture, of the New York Public Library, where he conducted additional research and revised his doctoral dissertation for publication as a book. The result is Race and Real Estate: Conflict and Cooperation in Harlem, 1890-1920 (Columbia University Press, June 2015). 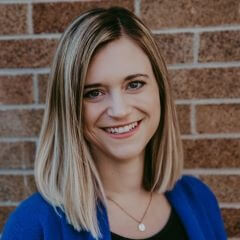 Vice President of Operations and Business

Hannah joined Antioch with a degree in Economics from Rhodes College and a Masters in Student Affairs in Higher Education from Miami University. Before coming to Antioch, Hannah worked with the Higher Education Data Sharing Consortium (HEDS), a consortium of small, private liberal arts colleges dedicated to sharing information and institutional data to support student learning. While at Antioch, Hannah has led campus efforts around accreditation with the Higher Learning Commission, supported institutional planning and data-driven decision making, and worked closely with Admission and Financial Aid.