Students work with faculty advisors to devise self-designed majors. Coursework in the major builds upon students’ experiences in the general education curriculum while providing students with pathways to deepen their knowledge or further develop their passion in a particular area of study.

Students examine contemporary and historical works in film/video, digital and sonic arts, and respond with their own writing, movies, audio works and installations. Students enjoy access to a video recording studio with a green screen and film lighting, an insulated audio recording studio, private editing suites with software including the Adobe Creative Suite, and a 100-seat cinema.

Students begin to make films in the introductory class Basic Media Production; they continue their education in AudioVision: Video Production Intensive, where they often tackle a collaborative project; and they develop independent projects in an Advanced Projects course. Media majors compliment this foundation with electives that may include special topics courses in Choreographed Films and Experimental Musicals, Sound, Screenwriting, and Cross-Cultural Encounters in Cinema. Students may also take courses taught by guest professors in photography and animation and become active in the student radio station or the local NPR station. Many students choose co-op experiences or Antioch Works jobs which compliment their learning.

Graduates of the College have received many recognitions. Leilah Weinraub ’02 directed Shakedown (2018), a feature-length documentary about an underground black lesbian stripclub in LA that won the LA Outfest Special Programming Committee Award. Julia Reichert ’70 won the Academy Award for Best Documentary for her American Factory (2019). Wendy Ewald ’74, a filmmaker, photography, activist and educator, received  MacArthur Fellowship in 1992 and works as a senior research associate at the Duke University Center for International Studies. John Korty ’59, TV and screenwriter, Emmy winner for The Autobiography of Miss Jane Pittman (1974), Oscar winner for the documentary Who are the DeBolts? And Where Did They Get Nineteen Kids? (1977). 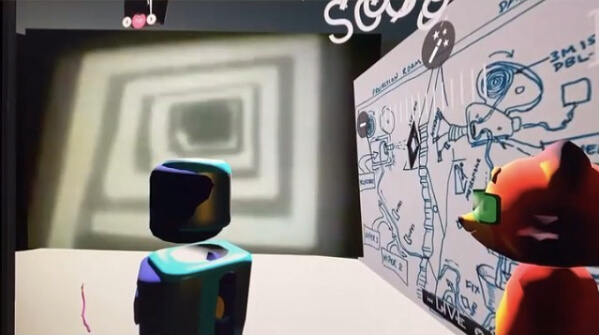 An image from a special screening of Fractal Feedback, which was shot, developed and simultaneously projected in 1974 by Tony Conrad and students in the Antioch Art Building. Forty-seven years later, current students screened the film in the space in which it was created and simultaneously presented a virtual screening in a VR replica of the art building, which visitors could attend as an avatar. Curated by Liz Flyntz 02’ and Catalina Alvarez, co-presented by Museum Without Walls and Arts@Antioch

When Designing Your Major

Students with a self-design degree primarily focusing on media arts should plan to take about 45 credits in MEDA and CAP prefix courses.

All students incorporating media arts into their major should take about 8 MEDA credits in history and/or theory.

Media Arts students have myriad opportunities for practical experience in the field in courses that engage local radio, television, and cinema, and through a variety of national and international cooperative work opportunities, including:

Faculty in the arts 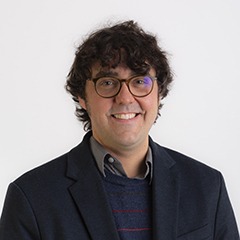 Associate Professor of Sculpture and Installation and Director of the Herndon Gallery, Faculty Trustee Lola Betz ’22 is a filmmaker, artist, musician, fashion-icon, and a true Antiochian. Lola is on the brink of completing a trilogy of feature-length films made at and about Antioch. Her work is rich, mysterious, and fun. Here is a student with great talent and potential. Enjoy this interview with Lola Betz ’22.

The Board of Trustees enthusiastically voted to grant tenure to Michael Casselli '87 and promote him to Associate Professor of Sculpture and Installation. Alumni Rally to the College, 2005 Grad Appointed Board Chair Iris Olson ’17 is a reproductive health professional whose recent work includes an op-ed addressing policy and lack of oversight in the sex toy industry.