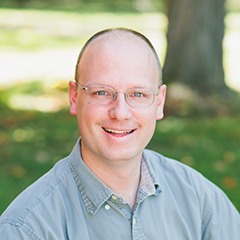 Instructor of French Dr. Cary Campbell comes to Antioch College most recently from the University of Pittsburgh where he served for two years as their Coordinator of French Language programs. He also trained there both as a linguist and as a literary scholar.  From his undergraduate training both in Linguistics and French, he developed interests in language pedagogy, syntax, Romantic and Francophone narrative fiction. They eventually culminated in his MA in literature and linguistics, and in his PhD in African literature with a dissertation focusing on the construction of national identity in recent novels from Côte d’Ivoire. Today, he is broadening his dissertation topic into a book project comparing literary representations of national identity across a range of African Francophone countries.

While pursuing this education, Dr. Campbell kept a busy schedule teaching all levels of French, as well as courses in phonology, approaches to literature, the history of the French Atlantic, the African novel of French expression, and Anticolonialism. His fifteen years of teaching experience has also included collaboration on several online French textbooks and interactive video-based French courses, earning him Contributing Author credits on Carnegie Mellon’s award winning Open Learning Initiative French Online program. Dr. Campbell has a long history of applying proficiency-based and communicative methods in the classroom and in infusing all his classes, from elementary French to advanced literature, with the cultural products, practices and perspectives he developed a love for during his overseas experiences in France and in Côte d’Ivoire.