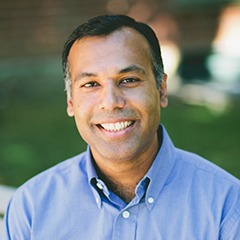 Rahul Nair is an Associate Professor of History at Antioch College. Previously he has served as an Assistant Professor at Georgia Gwinnett College in Lawrenceville, Georgia (2012-13) and at the University of Denver in Denver, Colorado (2005-12). He received his doctoral degree in History with a specialization on South Asia, from the University of Pennsylvania in 2006, after graduating with an M.A. in Modern Indian History from Jawaharlal Nehru University in New Delhi, India. His areas of specialization include South Asia, imperialism, and world history. He is currently working on a book titled, The Rise and Decline of India’s Population Problem in the Twentieth Century. He is fluent in Malayalam, French, Bengali, and Hindi.